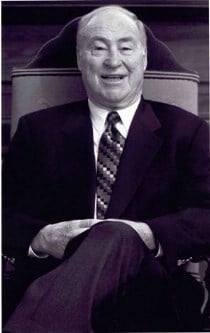 After St. Michael’s, he had an illustrious 20-year career in the National Hockey League with the Detroit Red Wings and the Toronto Maple Leafs. Red played on eight Stanley Cup teams. He played on 13 All-Star games, won the Norris Trophy as the top defenseman and also won the Lady Byng (most gentlemanly player) four times.

After his playing career ended, he coached for nine years in the NHL. He was elected to the Hockey Hall of Fame in 1969. Mr. Kelly was elected a federal Member of Parliament in 1962 and served in the legislature for three years. He was named to the Order of Canada in 2001. His two sons, Patrick and Conn also graduated from St. Michael’s.

Whenever St. Michael’s called upon “Red” to help with a school activity he was always willing to give his support.