One for the Ice Ages: Celebrating 40 Years

Through tears, a smile and a twinkle in his eye, Rob Tunney recalls that day back in 1982 when he got a call about an opportunity.

He was in his second year of working for the city at North Toronto Memorial Arena, following his graduation from Humber College in Facility Management.

The call came from Ross Blatchford, father of the late Christie Blatchford, formerly of the National Post and one of Canada's most prolific journalists.

Blatchford was general manager of the arena back in the 1980s.

"I see there is going to be more opportunity for you there in the long run," Tunney says he was told by Blatchford.

His comment came after Tunney received this message: "we have an opening at your old school at St. Mike's. We think it would be a great opportunity for you. Rob, it's time to come home."

The rest, as they say, is history. Forty years of history for Tunney who celebrates four decades of working at St. Michael's College School's arena in September 2021.

He started his journey as arena operator on September 7, 1982, the same time his wife started at the University of Toronto’s School of Pharmacy.

Since news of his work anniversary began to filter, the feedback has been steady and at times, overwhelming.

"A lot of people just can't believe it," says the native of Newmarket, Ontario. "I've heard, you're too young to have been here for 40 years, and you don't look that old!" 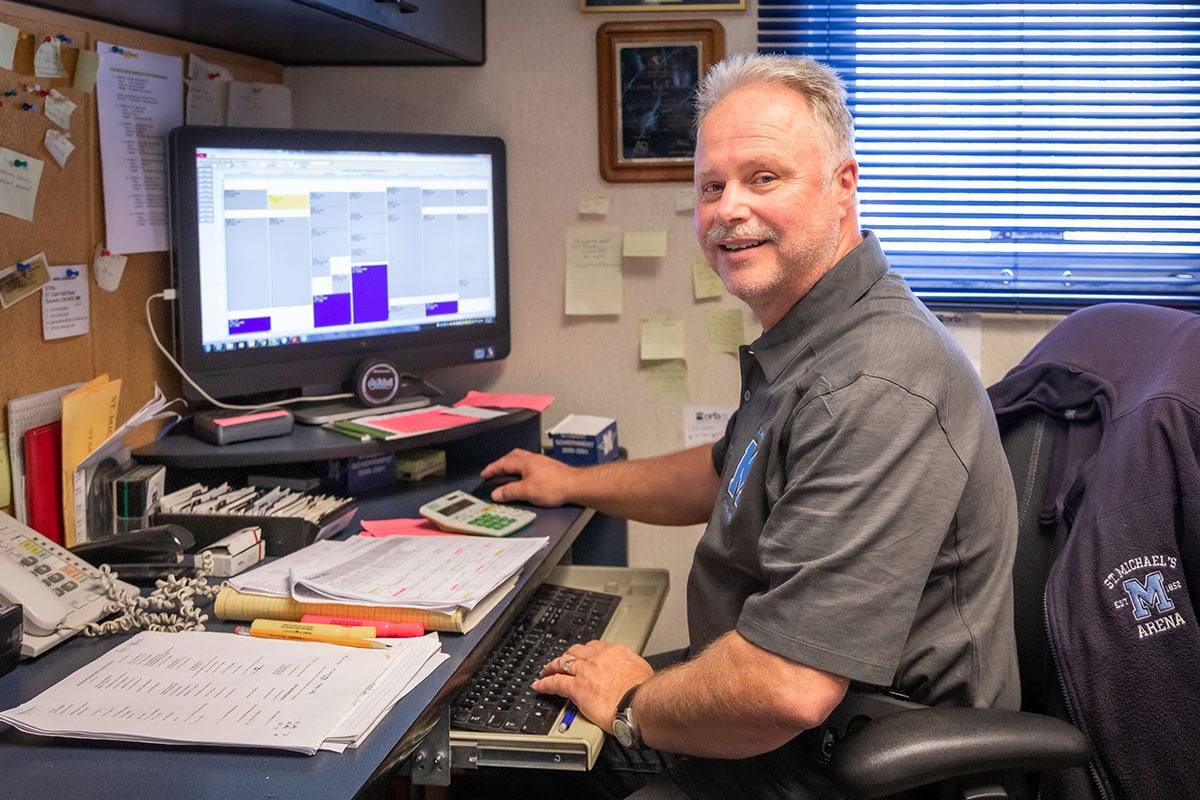 One recent comment in particular, Tunney says, "blew me away." It came in written form and said, "You've become a fabric of the school. Your warmth and integrity really exude what the school is all about. We're lucky to have you carry on the school's mission." He shares the sentiment through a cascade of tears.

Tunney puts the rare milestone into further perspective. "It's longer than my marriage! I've been married 35 years!" His wife Denise is a clinical pharmacist. He adds, "I could probably write a book. That's what my wife says. She's wondering when the book is coming out!"

If it gets written, that book would be flush with names (some of them famous), experiences (vast and varied), and stories of impact (countless and continuing). 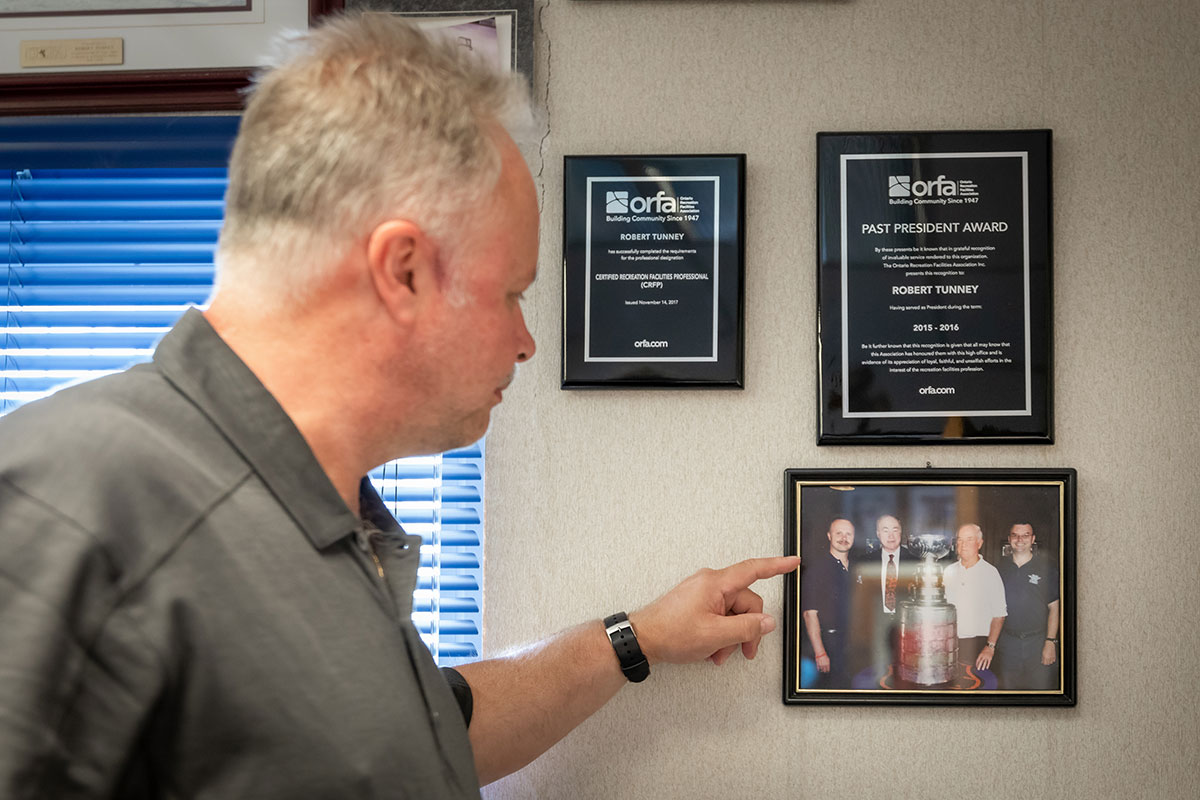 So many encounters, interactions, and memories from decades ago remain fresh in his mind. As arena operator, arena assistant manager, and since 1996, arena manager, the father of two and grandfather of three has seen and done it all in his role, and then some.

"You've got to be able to do everything in this job," he says. "And that's the beauty of starting from the ground up and working your way up. You know every facet of every job."

JACK OF ALL TRADES

But the role he says he spends the most time on — "being an ambassador for the school."

And it's no accident.

The arena building, he says, is often the first point of contact for many visitors. 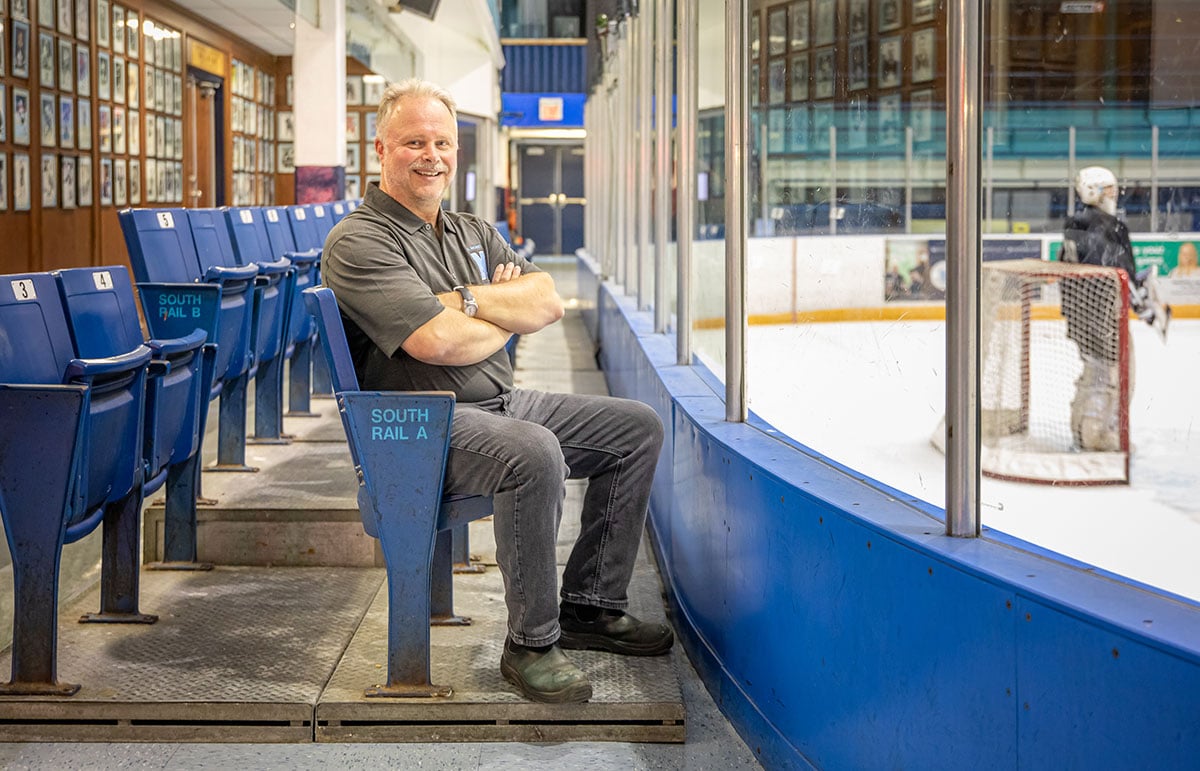 "It is usually the first place they come into because they're not sure where to go to the school," he says. "My door is open. And then the conversation always happens — why should I send my boy to this school?"

There are also other subjects discussed like hockey, history, academics, religion. Not many topics have been off-limits in the confines of the building dubbed the ‘cozy barn,’ with its venerable history, steeped in cache. It has been the subject of books, media stories, interviews, and documentaries.

Speaking of which, during his time, Tunney has booked, facilitated, welcomed, and supported a slew of events and visitors to the arena. The 45,000 square-foot building seats 1,000. 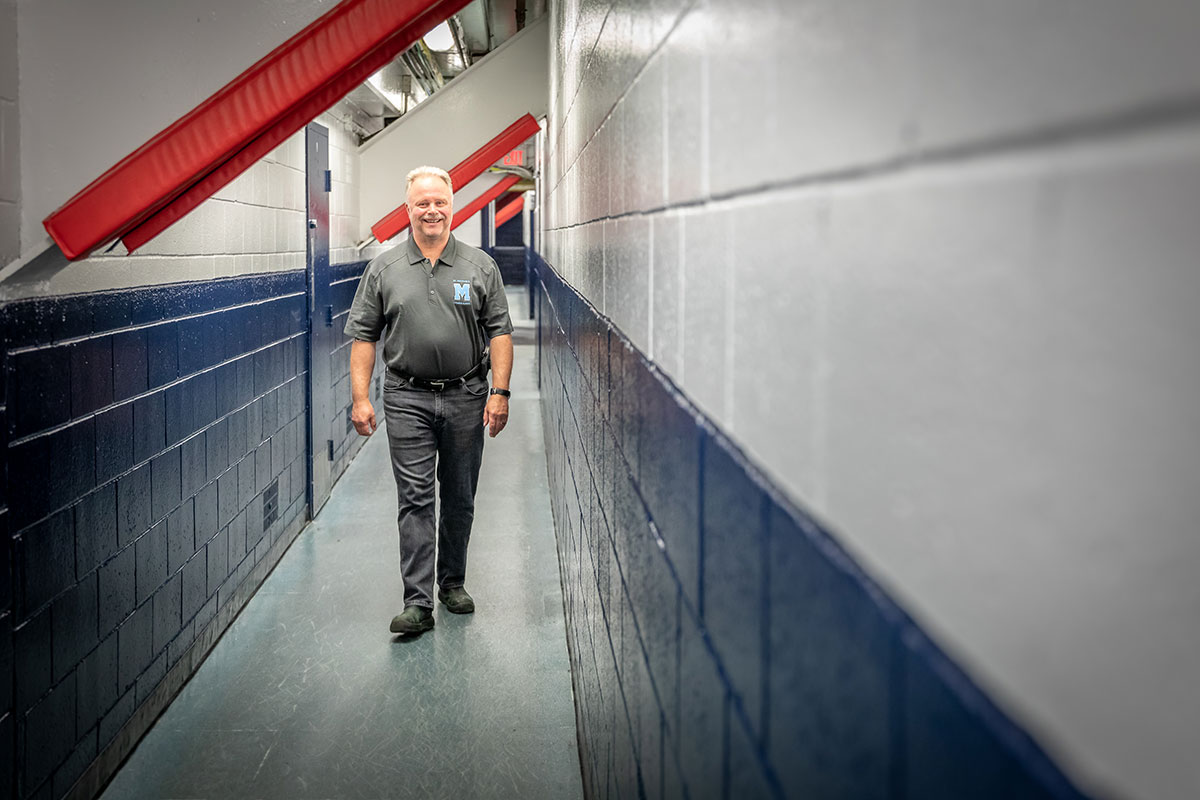 It has served as the backdrop to all kinds of occasions, says Tunney, including:

"Sometimes you wouldn't recognize the rink, because of the way they dressed it," he says. 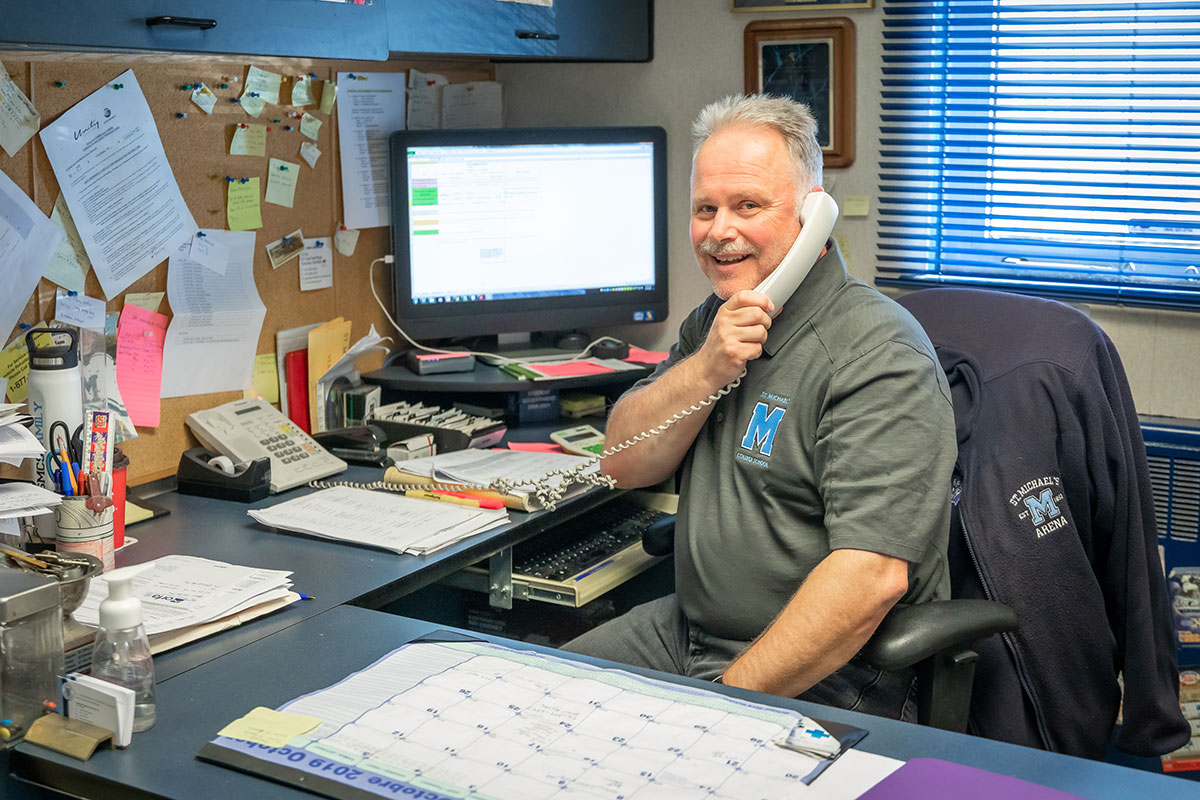 That eclectic list leads to the next question for the man who has had a hand in most, if not all, of these encounters. His all-time most memorable interactions?

He answers with little hesitation offering the names and why they made an impact on him.

Don Cherry: "His passion for minor hockey and for Canada."

Tunney says he got to know the former Hockey Night in Canada Coaches' Corner mainstay, as well as his late wife Rose, during the 1980s.

Red Kelly: "A gentle man. He was a quiet man, who had this professionalism and honesty about him."

An SMCS alumnus, Kelly, a former Toronto Maple Leaf and Detroit Red Wing, would later watch his son and grandchildren play hockey at the arena, says Tunney, who served as the Deacon at the NHL legend's funeral in 2019.

Next on his list: "All alumni who come back," he says. 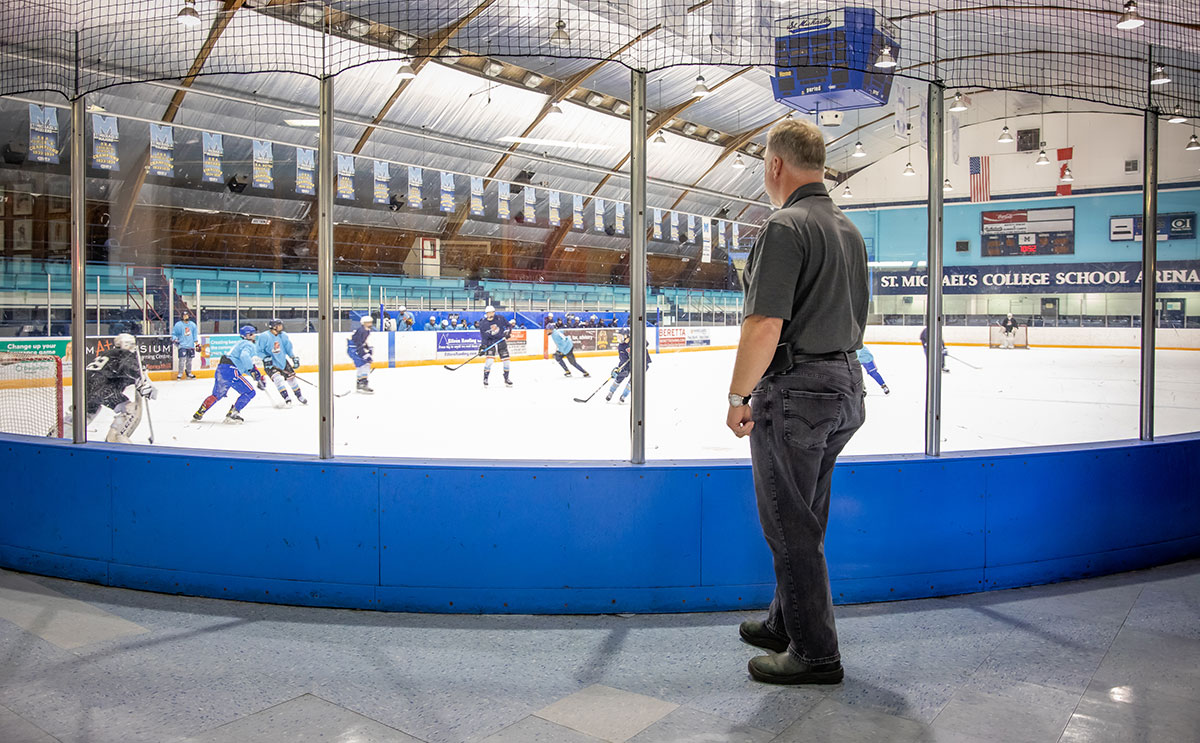 The day-to-day provides plenty of satisfaction and delight.

"When people come into the facility, some of them say, 'Oh, boy, it hasn't changed’. What a clean facility we have, and how hard it must be to maintain that. People who play here recognize that we don't have big dressing rooms, we don't have modern amenities. They like the charm here. They say what a nice-looking facility you have, a well-run facility and the staff are smiling and willing to help. That makes you feel good!"

For the man who has spent most of his life inside the barrel-shaped roof shrine to hockey, there is no other option.

With a staff of three and as many as a dozen part-time helpers throughout the year, Tunney has not only seen and done a lot in his job but given up much as well. 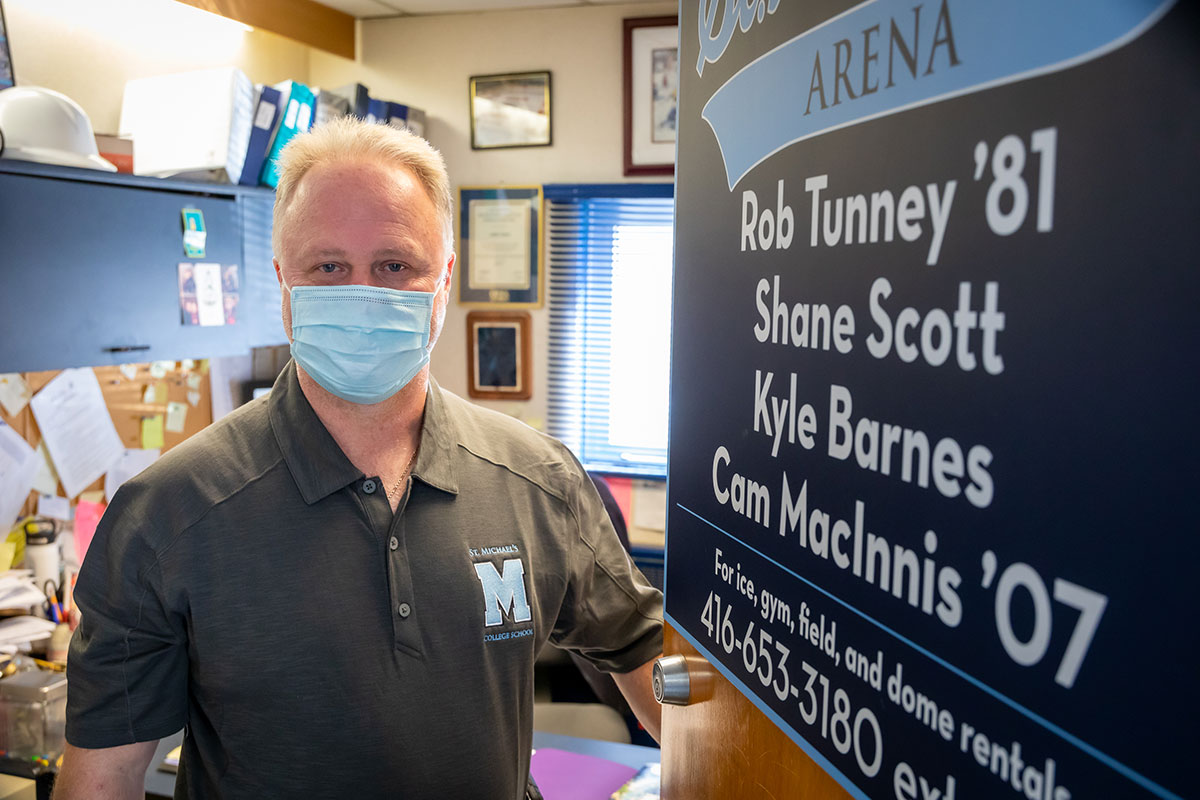 Over the years, when duties call, whenever they beckon — he answers.

"My wife came to understand early that my job is important. And I've never let my family down. But sometimes I've got to step out, whether it be from a family gathering or get-together because people need help. So, you've got to go in and deal with it," he says. "There have been familial sacrifices along the way of those 40 years."

While the length of his workdays and sleep deprivation peaked during the 1990s — forcing him to take time off due to depression — Tunney says he has since found a better balance with the help of his doctors, family, and friends.

You'll still find him here by seven o'clock every day, including Saturday mornings during the winter — working on something or another.

After all, it's not just a rink or a second home to him. It is also where he spent a good chunk of his formative years, as a student at St. Michael's College School, starting in 1976. 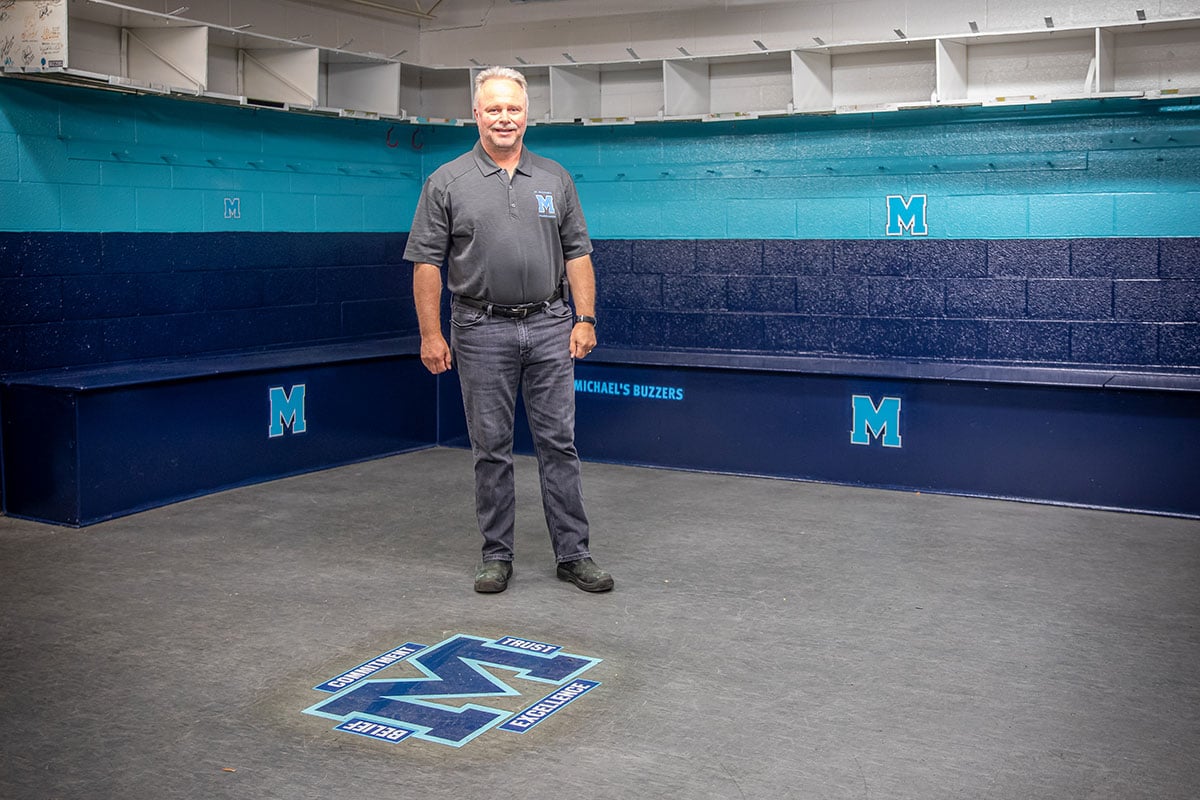 "What it [this rink] stood for was part of the fabric of the school for a lot of us," Tunney recalls. "That's where a lot of friendships were forged, a lot of battles won or lost on the ice, and some championships, but in the end it's where we went for enjoyment."

And as the eldest of three children who, at the age of five, lost his father tragically to suicide — the fond memories remain etched in Tunney's mind.

They included working alongside former teachers, in the early years of his arena role, with his brother for 25+ years, all while turning rink-side acquaintances into lifelong relationships along the way. Some even became mentors or mentees.

"Being able to carry on that legacy has been important to me," he says. 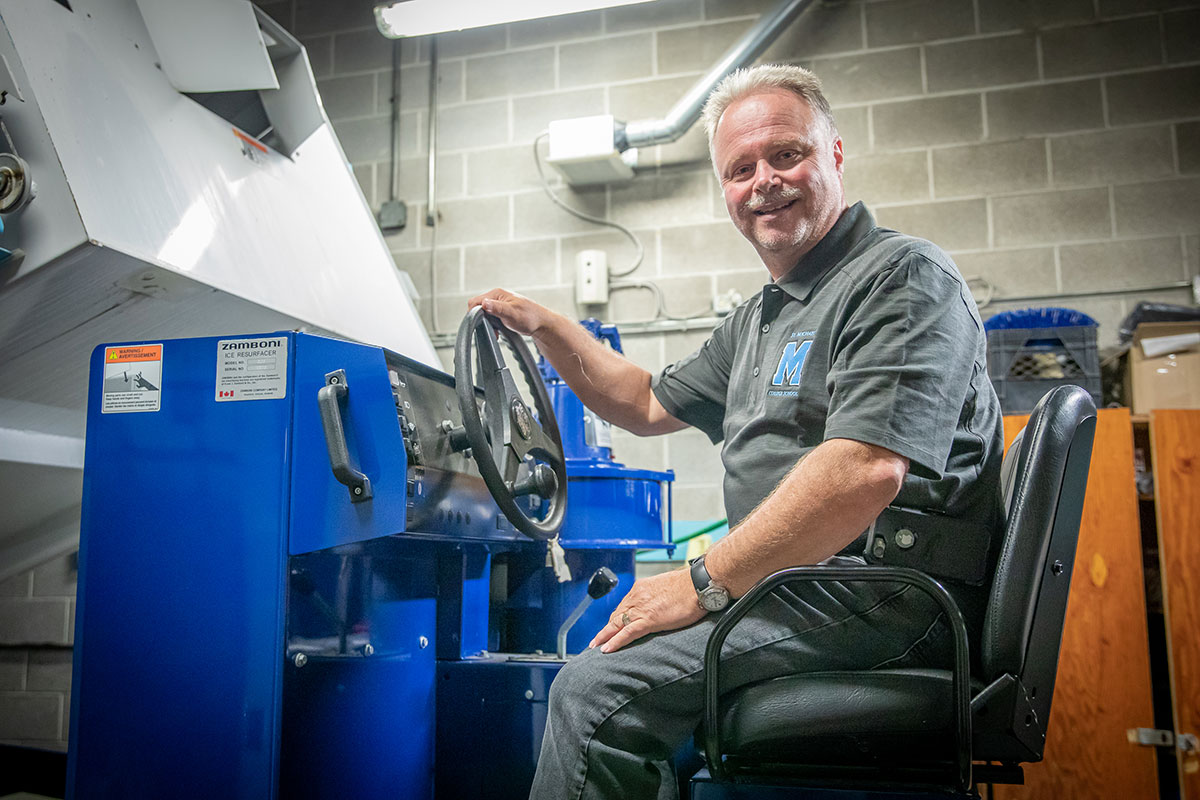 "At any given time, we've got probably 1,100 stakeholders right across in the school. It is great to see it back open again, see people playing. It warms your heart. That is what it was built for. That's why we're here. It helped shape who I am today."

In 2018, it inspired him to become a Deacon, an ordained minister in the Catholic Church, who can carry out many similar tasks to that of a priest. It also inspired him to coach both figure skating and hockey for 20 and 30 years, respectively.

"The most gratifying thing is seeing a child in September out on the ice, sitting on the ground, not being able to get up, not being able to skate and then watching their progression throughout the whole year. In April, they're playing in learn to play tournaments and they're able to go back and forth on the ice without much help. That's  really something."

Impact both seen and unseen. 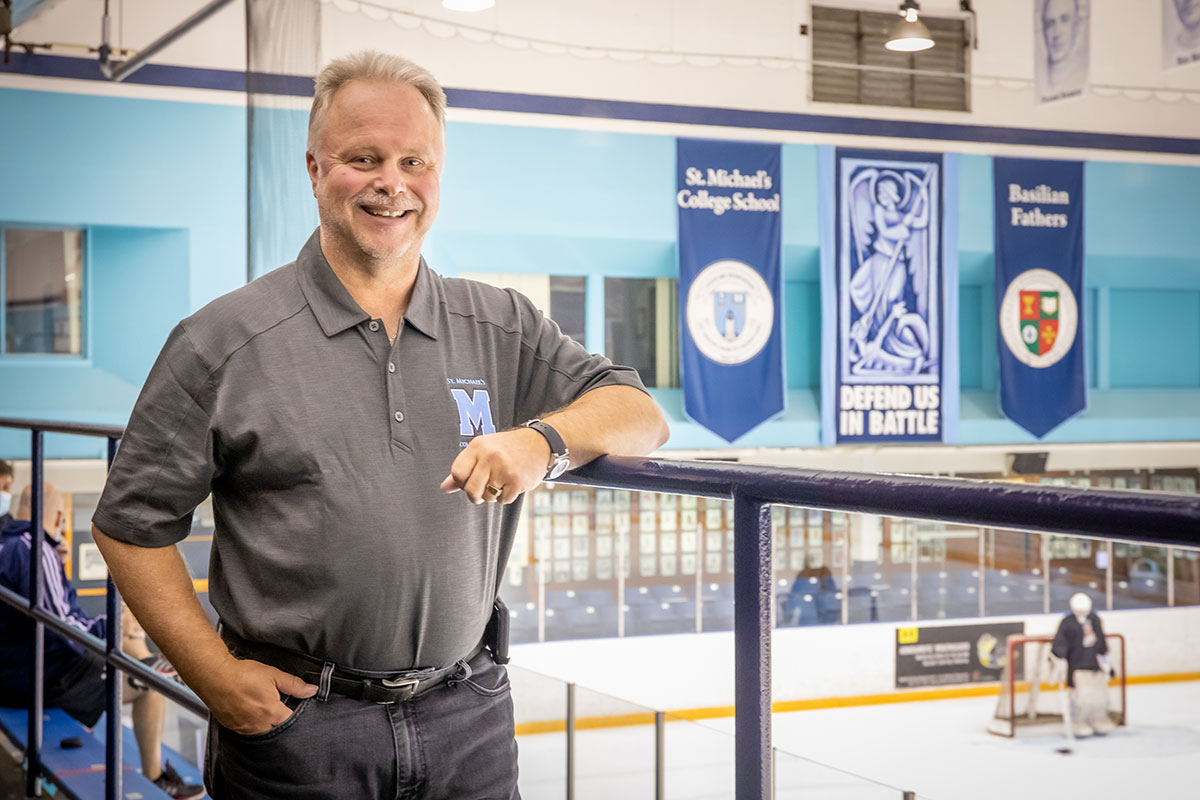 No ordinary job. And certainly not a role for everybody.

But for Deacon Rob Tunney '81, it has been a seemingly natural fit.

The road to 40 years and counting paved with goodness, discipline, and knowledge — and delivered with much faith, character, and service.