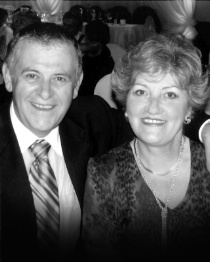 Mr. and Mrs. Santi became members of the St. Michael’s community when their son, Paul, entered grade 9 in 1994 followed by Marc in 1996 and David in 1998. They became active supporters of many fundraisers during their sons’ high school education.

Leda graduated from St. Joseph’s Morrow Park in 1967 and attended Teachers’ College and York University. She went on to teach with the Toronto Catholic District School Board for 10 years.

Edward has been a very dedicated volunteer with numerous St. Michael’s committees, including the 150th Anniversary Gala Dinner, 100 Years of Hockey Anniversary, and the St. Michael’s Annual Golf Tournament.

Through the Marc Santi Foundation, they have sponsored a stain glass window in the Grand Foyer of the school and established the Marc Santi Exit Scholarship in memory of their son Marc.

Ed and Leda serve as active members of the York Central Hospital Foundation where Ed is a current member of the Board of Directors and Past Chairman. In 1994, he was responsible for the inception of the hospital’s Proud Partner Golf Classic that has raised over $800,000.

Ed has been a dedicated volunteer to several youth organizations in his community, in particular minor hockey where he served as an executive member for the Richmond Hill Hockey Association for more than 20 years.

Ed and Leda founded The Marc Santi Foundation in honour of their son Marc who lost his life in a traffic accident during his graduation year at St. Michael’s. The Foundation has raised and disbursed $185,000.00 to many charitable organizations, institutions and individuals in need.

Both Ed and Leda are strong community minded individuals and deeply committed to their church.