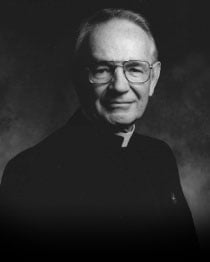 The words gentleman and scholar define well the character and the work of Fr. Norman Fitzpatrick. His years as principal illustrated his gentleness; his years as teacher illustrated his scholarship. No student or teacher left the presence of “Fr. Fitz” without knowing and experiencing his gentle ways. He was a careful scholar. His knowledge of French culture and language enriched his students. That same care and scholarship characterized his approach to drama regardless of whether it was a medieval morality play or a modern musical.

The Order of St. Michael honoured Fr. Norman Fitzpatrick for his care and concern for quality of a St. Michael’s Education, for his years of producing plays and musicals, for his work and devotion of the “refounding” of the school, for his unselfish love of St. Michael’s.

Father’s life as a Basilian has been characterized by scholarship and diligence. Whether it was an exercise planning renovations of the school or a change in the school’s program, all was carefully recorded and meticulously implemented.

Fr. Fitz’s Chapel Course was memorable. In it, he introduced first year students to the history of St. Michael’s College School and to the traditions of the Catholic Church. Young men learned to appreciate the scholarship and bravery of the Basilians who founded their school; each student was invited to appreciate and practice the traditions of the Catholic Church.

Catholic Education has been described as a syntheses of culture and Faith. Fr. Fitzpatrick lives the synthesis.

Father Norman Fitzpatrick made significant contributions to Catholic Education in Canada and he loved and cared for St. Michael’s College School. We placed his name in the Order of St. Michael for the edification of our community and in memory of his endowment as educator, dramatist, and Catholic Priest.