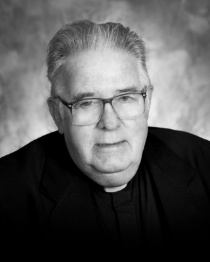 Fr. Thomas Mohan C.S.B. graduated from St. Michael’s College School in 1948. He entered the novitiate in 1950 and was ordained in 1959. His first appointment as a priest was to Michael Power High School where he taught and administered for twelve years.

Fr. Mohan was appointed by the Basilian Community to Calgary as an Associate Superintendent of the Calgary Separate School Board in 1981.

On his return, he was appointed President and Principal of St. Michael’s College School, and under his guidance and vision, spearheaded the renewal of the school building and its academic program.

In September 2000, Fr. Mohan retired to Fr. Henry Carr Farm to conduct retreats, participate in Canadian rural life and to assist when called upon by the parishes and schools in the area.

For more than forty years, Fr. Tom Mohan has exemplified the contribution of the Basilian Fathers to Catholic education throughout the country in fostering “goodness, discipline and knowledge”.

In his words, “Since 1852, Basilians have invited young men to join them in identifying Goodness and pursuing the Truth. As students of St. Michael’s, we became disciples of the Basilian Fathers; some as priests, others as lay Christians.” It is truly fitting that we induct into the Order of St. Michael the man responsible for its founding.

St. Michael was ordered to the goodness of God. We are ordered likewise.