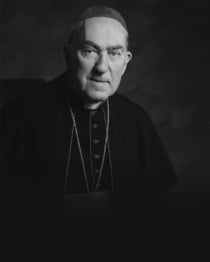 Cardinal Gerald Emmet Carter is a long-time supporter of the goals and objectives of St. Michael’s College School. Cardinal Carter was born in Montreal, Quebec, and spent his first 25 years in the priesthood working in various educational fields.

He founded St. Joseph’s Teachers College in Montreal and was a member of the Montreal Catholic School Board for 15 years.

Throughout his illustrious career, Cardinal Carter was involved with adult education both at the university level and as president of the Thomas More Institute in Montreal. He also served the Toronto community in various ways such as caring for the treatment of minorities, opening of Covenant House, and worked to increase affordable housing for the elderly and disabled.

Cardinal Carter also wrote several publications on his insights into catechetic and the teaching of religion, the Sacrament of holy Orders, and on his convalescences.

From 1962 to 1990, Cardinal Carter spent three decades as Bishop in both London and Toronto, Ontario. In 1979, he was created a Cardinal by Pope John Paul II.

The community of St. Michael’s College School was pleased to confer the Order of St. Michael on His Eminence Gerald Emmett Cardinal Carter, on Friday, November 12th, 1999.