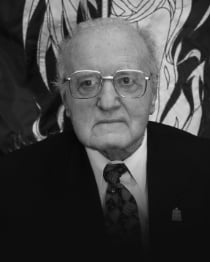 His professional career included forty years of service as a General Medical Practitioner at St. Joseph’s Health Centre in Toronto.

His career in politics was long and storied as he stands as Canada’s longest serving Parliamentarian. He was an elected Liberal Member of Parliament seven times (1957 to 1978) and served as Parliamentary Secretary to six ministers including Health & Welfare, Foreign Affairs, Consumer & Corporate Affairs and Indian Affairs, and Head Delegate to the United Nations General Assembly (1963-66).

Dr. Haidasz was responsible for delivering the eulogy for Sir Winston Churchill, was appointed to the Privy Council of Canada, the first Minister of State for Multiculturalism under Prime Minister Pierre Elliot Trudeau (1972-74), and served in the Senate of Canada for twenty years (1978 to 1998). He was the first Polish-Canadian appointed minister of the federal cabinet and member of the Senate. His commitment to St. Michael’s included being one of the first volunteers of the school’s Building Fund Campaign.

Among his many awards and accomplishments, Dr. Haidasz was awarded Knight Commander Order of St. Gregory the Great with Silver Star by Pope John Paul II (1997).