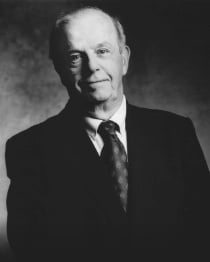 Mr. MacLellan graduated from St. Michael’s College School in 1946. He returned to St. Michael’s to coach football, first at the old school and later as head coach at the new school. He coached the senior team in the 50’s and later he helped coach the freshmen with Fr. Volpe.

Mr. MacLellan has been a long time Basilian Associate and a member of the Building Fund Committee. His three sons – Campbell Jr., Ian, and Scott all attended St. Michael’s. On Friday, November 12th, 1999, the Order of St. Michael was conferred upon Mr. Campbell MacLellan.