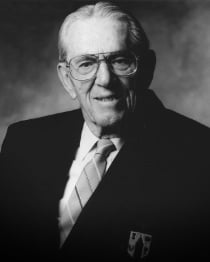 He taught for several years in the Etobicoke Board from where he retired in 1974. His two sons, Paul and now deceased John, graduated from St. Michael’s.

Mr. Cerre was a bright student, an exciting player, a caring teacher, an innovative coach, and a devout Catholic. On Friday, November 12th, 1999 the Order of St. Michael was conferred upon Mr. Charles Cerre.