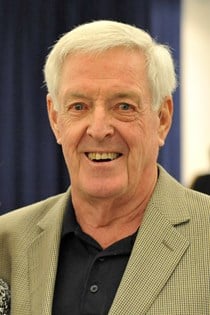 After obtaining a BA and an MA from St. Michael’s College at the University of Toronto, Hugh McDougall began teaching at St. Michael’s College School in 1961, marking the beginning of his 25-year career at the school, where he served as teacher, vice principal, coach, counsellor, and staff mentor.

In 1974, Hugh relocated to Lausanne, Switzerland to take the position of Headmaster at the Canadian Junior College. This move turned out to be a life-changing experience for him and his wife, Eleanor, and their four children Elizabeth, Mary Anne, Brian ’84, and Peter ’87.

Throughout these experiences, Hugh never lost touch with his St. Michael’s colleagues. He continues to be a presence at sporting events, golf tournaments, and the annual Turkey Roll.

Despite many professional accomplishments, his family, which has grown to nine grandchildren, remains his greatest achievement, thanks mainly to Eleanor to whom he says he owes everything.