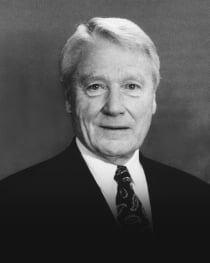 Geography was his teaching specialty and he also coached football for 25 years. The last seven years of his career he served as vice-principal.

Over 10,000 young men have been taught, coached and counselled by Jack Fenn and the verdict is virtually unanimous from all – he was honest, fair, demanding and loyal to everyone who came into contact with him.

For his years of concern and toil both in the classroom and on the football field, for his tireless efforts on behalf of the young men of St. Michael’s community, for exemplifying the very motto of St. Michael’s – “Teach me Goodness, Discipline and Knowledge” – it is an honour to have placed his name in the Order of St. Michael.