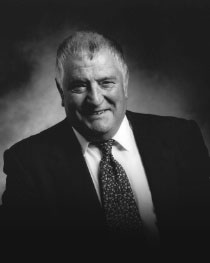 Raffaele Montemurro is a gentle man. His whole demeanour speaks of gentleness and love of people. Everyone rich or poor, child or adult, eminent or unknown feel confident in his presence and understand that he is offering genuine friendship. His broad smile and welcome, signal a man who is at peace. No one in need is turned away empty-handed. Ralph loves people. Everyone is his neighbour.

Ralph did not graduate from St. Michael’s College School but he has a love and concern for St. Michael’s which equals that of those who did attend. One day, we were discussing renunciations to the school building. Ralph cautioned: “Don’t do anything to that building which would change it. That building means a great deal to me and my family.”

Four of his sons did graduate from St. Michael’s College: Dominic, Enzo, Ralph and Marco. They have all done wee and are loyal to the school. Unfortunately, Enzo died after his first year at university. Ralph reacted in the face of death as he reacts customarily in the face of life. He mourned the death of his second son. However, his faith and his persistent joyous outlook on life won the day. “God gave Enzo to us for nineteen years: now God has taken him. That’s the life.”

Ralph his lived the school Motto of Teach Me Goodness, Discipline and Knowledge. His goodness is obvious. He is generous to the poor. He has a deep love and respect for the Church. He is wise and knowledgeable.

Ralph is a willing participant in all St. Michael’s projects regardless of whether it is repairing and building, gathering food and clothing for the poor or raising funds for an academic need.

Raffaele Montemurro is a successful business man, an artisan, an exemplary Christian, a St. Michael’s man. With pride, we place his name in the Order of St. Michael.