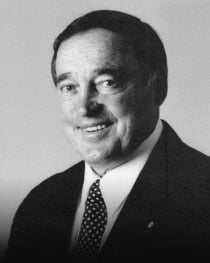 As a teenager Frank attended St. Michael’s College School and played on the Majors of the O.H.A. Junior League. He won the league’s Most Valuable Player award.

In 1958, he signed with the Toronto Maple Leafs and won the Calder Award Trophy that year as the N.H.L’s top rookie.

By 1962, Frank was recognized as a super star. He led the Leafs to their first Stanley Cup in eleven years. He repeated that effort and the Leafs won three more Stanley Cups during the 1960’s.

In 1974, Frank signed a four year contract with the Toronto Toros of the W.H.A.. He ended his hockey career in 1978 with an enviable record of 619 goals in 22 professional seasons, 9 all-star team selections and a member of 6 Stanley Cup winning teams.

On October 19, 1994, the Governor General, the Right Honourable Ramon John Hnatshyn conferred the Order of Canada on Frank. The nation recognized that his hockey talent and his sportsmanlike conduct made him one of Canada’s best loved hockey stars. The respect that Canada has for Frank has grown with his generous support of the Canadian Kidney Foundation, the Easter Seals Society and the Canadian Special Olympics.

The name of Frank Mahovlich was placed in the Order of St. Michael as a sign of our affection and admiration for a St. Michael’s man who has brought honour to his family and his school. A gentle man whose expertise and generosity have brought joy to athletics and relief to those who suffer.